Where the Wild Things Are by Maurice Sendac 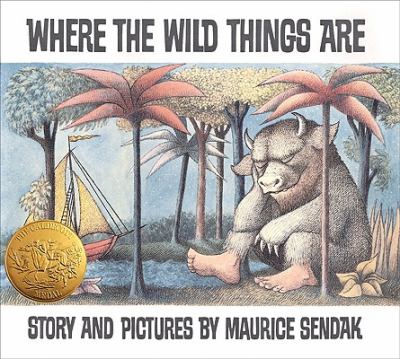 Where the Wild Things Are has long been one of my favorite children’s books. My family and I own copies in both Spanish and English (although I must admit, I prefer the original English version). In fact, I love this book so much, that a few years ago, my friends and I entered a sidewalk chalk art contest and re-created one of our favorite scenes. We had a great time hearing all the comments as people walked by. . . Almost without fail recognizing and reminiscing about reading this book at school, at home, or at the library. Kids were universally excited to relate to a famous piece of art and literature outside of a typical literary setting. 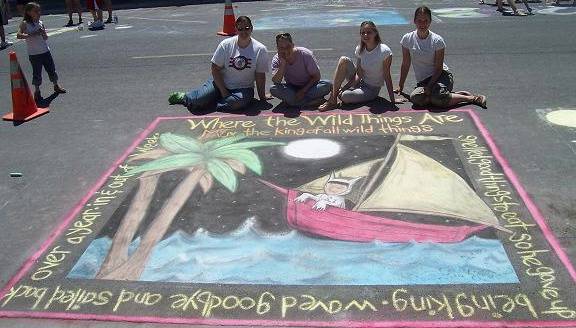 Holly (in the purple shirt) and friends with Max

Needless to say, I was super excited when I heard about the movie, which was shown in theatres during the fall of 2009, and is now being released on DVD. I had heard great reviews, and convinced my sweetie that we should go on a date to watch the movie so I could include it in my review of the book. As you can tell, I obviously didn’t post a review right away. Part of that was due to moving at the same time, and part of that was due to the fact that I really didn’t like the movie.

We’ve had this discussion before in the kidlit world with Chronicles of Narnia. I continue to hold to my opinion that it is very difficult to produce a movie of a book that truly satisfies the literature loving world. So, my reasons for not liking the movie? Well, let’s start with what I did like: the costumes/animation and the creation of the Wild Thing’s world were all phenomenal. The ‘Wild Things’ were true to form and very accurately portrayed physically. What really caused me discomfort was the level of dysfunction and anger in Max and his family. Maybe I’ve lived too sheltered of a life, but the book, in my opinion, wasn’t about a dysfunctional, hurting boy. The book was meant for a much larger audience- one that understands that little boys are sometimes wild and do crazy things that get them sent to time out. And, having spent a fair number of hours in time out as a child, I also know that time out is often a place where your imagination takes over to entertain you. Even for minor infractions of the ‘law’, timeout can inspire wild imaginings of running away to a place where everyone thinks you are wonderful and you can do no wrong.

Apparently, when Maurice Sendak first published this book, he was criticized for creating too dark of a children’s book. Some people think that the movie will eventually enjoy the same degree of fame and appreciation. I disagree. I do, however, believe that English teachers will use it in the classroom and come up with assignments to get kids thinking about what deep things Max is really struggling with. I hope that kids will learn to love and appreciate the book long before they ever see the movie, because I think the movie will be likely to change their perception of the book. I also don’t recommend the movie for young children- the target audience of the book. It’s simply inappropriate for young children, but of course, that is also a matter of opinion.

What do you think?