Woohoo!!!  The Bookscoop’s sisters managed to pull off two Doublescoops in one month. Our review of The Day-Glo Brothers: The True Story of Bob and Joe Switzer’s Bright Ideas and Brand- New Colors by Chris Barton and illustrated by Tony Persiani is part of our Purple Day challenge to raise public awareness about epilepsy and seizures. One in ten people will have a seizure in their life-time and one in a hundred will have epilepsy. We want people who have epilepsy to not feel so alone and this happens to be a favorite book of Cari’s daughter. If you comment on this post and/or participate in our Purple Day Challenge we will enter your name in a drawing for The Day-Glo Brothers. Please see our Purple Day post for eligibility requirements. 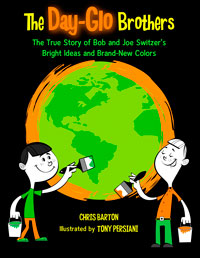 Holly: When I picked it up, the librarian was just putting it on the request shelf for us. She turned around and said, “That book has great pictures!” and I agree. The colors are very illuminating. Tony Persiani does an excellent job.

Cari: The pictures really, really add to what you’re reading. Which is what a picture book is supposed to do, but not all of them actually do. It helps that you are talking about colors that you can only see in the dark with certain lights. So the illustrations are black and white in the beginning with a few select colors. It helps you realize what the world is like before those eye popping colors. I liked the story too, did you?

Holly: Yes. I liked that the Switzer brothers had goals early in life, but their lives didn’t necessarily turn out how they planned them.

Cari: That’s a lot how life is. They weren’t always interested in the same things, either- Joe was an entertainer and Bob wanted to go to medical school.

Holly: And Bob had an accident that resulted in a head injury that left him with seizures & double vision so he wasn’t able to go to medical school anymore. The two brothers experiment while he’s trying to recover in the basement.

Cari: Yes, light would bother him. They started working together out of boredom. I’m very interested in these two because of my daughter’s seizures. I was curious to know how he dealt with seizures the rest of his life or if the seizures eventually stopped. During Bob and Joe’s era people with epilepsy did not talk about it. In fact a neurologist today has been doing research on Franklin Delono Roosevelt and there is a lot of evidence to suggest he had epilepsy. I wondered if he couldn’t complete medical school because of prejudice about seizures.

Holly: Medical school is very intense. Without specific allowances for a disability, it may be impossible to complete medical school due to lack of sleep, which I hear contributes to seizure activity.

Cari: Yes, we have to be very careful to make sure our daughter gets adequate rest. We’ve also had to put in place protocol with the school for the special allowances this sometimes requires. Like for instance, the recent time change that throws our sleep/wake cycle off triggered a seizure in my daughter last year. So this year, we took extra precautions and had to take her to school late a few times.

Holly: I’m glad that you take such good care of her! I liked that this is the author’s first book  and that he was inspired to write it when he heard the Day Glo brothers’ amazing story.

Cari: Despite Bob having a what sounds like seizure disorder, I can’t say that he did have epilepsy although to be diagnosed you have seizures that do not have an underlying problem that can be corrected. Bob still did a lot of great stuff & both brothers had a lot of fun. If you suffer a traumatic head injury you have a 50% chance of developing epilepsy and it can develop years later. It’s so important to protect your head and that is why helmets are critical in prevention of post-traumatic epilepsy

Holly: The book makes it clear at the end that even though they didn’t become what they thought they would as kids, they still achieved their goals and I think that’s a great example.

Cari: Their paints were used in WWII to help pilots land and also to avoid problems with friendly fire. Their paints made it easier to identify the enemy from an ally.

Holly: Yeah, I wonder if there were spies trying to figure out how they made those glowing colors- or was that world wide knowledge by then?

Holly: So, how did you find out about the book?

Cari: It was a Cybils book we read in my book club. It was one of the ones I liked the most. My daughter also enjoyed reading it. I think she liked knowing that there were lots of cool things you could still do even if you have seizures.

Holly: I remember when ‘neon’ colors were all the rage.

Cari: I do too. Now we know who to thank. Some of them are coming back.

Cari:  You know I bet those brothers didn’t think that they would actually work together. You know a magician and a medical doctor don’t seem like they would go well together.

Holly: I beg to differ. Isn’t that what we expect from medical professionals? Magic?

Holly: I think the book is fascinating for kids – even if they can’t read it on their own, the pictures will appeal to them.

In lieu of a trip down memory lane, we thought we’d share some insight into our real personalities…

Cari: Growing up I was more of the idea person and tended to be in trouble more than Holly.

Holly: So far this isn’t any different than our stories.

Cari: How are you different from how we represent you in the stories?

Holly: I don’t let people walk all over me- you especially. I actually do have a back bone and opinions about things. I do tend to work in the background, so that much is true. How about you?

Cari: Well, I was not really a devious child. Yes, I did get in more trouble than Holly and have an overactive imagination. But, I wasn’t generally mean. I think I still come up with lots of good ideas for stuff.

Holly: Yes. You do. Like creating a book blog.

Holly: As always, I thought you were crazy when you brought up the idea, but did anyone ever tell you that you are convincing?

Cari: I’m known for my powers of persuasion. Speaking of which, isn’t it time we shared that one story?

Holly: Not unless you want to share the other one.

Cari: Blackmail. Did anyone ever tell you that you were good at blackmail?

Holly: Nope! It goes both ways, though. If you want to share my story, I’ll share yours.

Cari: You know, I think some stories are better left untold.

Cari: You’re not so bad with those persuasion powers yourself. Maybe you should thank me.

Cari: For teaching you all my skills, of course!

Holly: I think we’re off track here. Aren’t we supposed to be telling them what we’re really like? I think we’re back to our paper personalities now.

Cari: Oh, yes. I guess it’s time to put out the lights on this doublescoop.

Holly: I think it might glo in the dark.

Cari: Yes, there is still a light on.

Holly: It’s your computer screen. Push the little circle button and it will turn off.

Holly: I never said you were.