Half Moon Investigations by Eoin Colfer 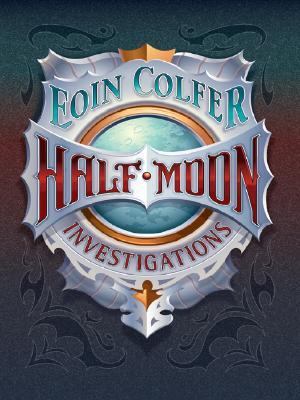 In celebration of St. Patrick’s Day, we bring to you a new Double Scoop! A wonderful book written by an Irish author about an Irish kid in, you guessed it, Ireland!

Half Moon Investigations by Eoin (pronounced Owen) Colfer, is a kid-detective book that we are sure we would have loved when we were young. Actually, we love it now too, so hopefully that means we’re still young! Just in case the author’s name is ringing a bell, we will save you a trip to yahoo or google’s search engine and just tell you: Yes, this is by the same author as all the Artemis Fowl books.

Holly: My favorite part of Half Moon is that Fletcher was a real detective – he passed an online course for people over 18. So he was officially qualified even though nobody would believe him.

Cari: I thought you picked the book because Fletcher was short and you wanted a chance to poke at my shortness. Fletcher Moon is called Half Moon because he’s short. I do think the book is a good transition for kids who have outgrown Hardy Boys and Nancy Drew – it’s more complicated than the formulaic plots of the Nancy Drew and Hardy Boys books.

Holly: Honestly, I only picked the book for other reasons. First off I picked it because it’s set in Ireland, and we are Irish. Secondly, we love good detective stories and last of all, because it refers to Irish Dancing which we both did for many years.

Cari: Are you sure it’s not because I’m short?

Holly: No Cari, that thought didn’t even enter my head. Thinking of thoughts I never had, I don’t remember any parts in the book that I didn’t like.

Cari: I’ve read the Artemis Fowl books. Half Moon is similar to Artemis in that he is very bright and can get around adults when he wants information. Like hacking computers, getting information. Although Artemis is a juvenile genius delinquent (boy that’s a mouthful) with a lot of money in a fantasy setting. I thought Half Moon was a little bit more believable.

Holly: I appreciated the glimpse into the criminal world. Particularly interesting was the network of connections. I liked the example of the one ‘good’ kid, Red Sharkey, in the crime family trying to break the mold and be different. He wanted to be a model citizen, but because of his family people didn’t want to let him.

Holly: He tended to get in trouble when he was trying to help out.

Cari: I did not like the head mistress of the school and how she kept a list of good kids and bad kids with pictures. The good kids were angels and the bad kids devils.

Holly: I thought a lot about how often we take people and label them and sometimes it’s really difficult to let them escape that label.

Cari: Let’s talk about the girls’ gang, Le Fountanin. Basically, pink-loving or obsessed 10-year-old girls with a leader who is so ‘brilliant’ she is almost crazy. She appears to be all fufu and fluff on the outside, but she’s really made of ruthless steel. Whereas the Sharkey crime family is the opposite. On the outside they appear like steel, but they can really be generous when you know them.

Holly: Let’s talk about crime in Ireland. How much of it is related to the whole protestants vs. catholics ages old disputes?

Cari: I think this book is set in Ireland vs. Northern Ireland because the terrorist group IRA is in Northern, which is part of the United Kingdom. When I talk to people from there they talk about shopping. Just to go grocery shopping there are metal detectors. I’m not sure how much is Ireland and how much Northern Ireland spills over.

Holly: I’m just wondering if the level of violence and crime the girls were willing to go to was influenced by the community.

Cari: Or it could just be the author trying to break stereotypes. Criminals are often not the worst bad guys sometimes the worst criminals are people you wouldn’t think of. The Sharkey family did crime, but they weren’t cruel generally. Whereas this April girl is Miss Junior Criminal Mastermind in the making.

Holly: What do you think about they way Half-moon is attacked?

Cari: I thought it was scary and I think he was being stupid.  But, he is 12-years-old and they don’t always make the best choices. I think a lot of kids like Half-Moon might try it.

Holly: I thought it was extreme battery for a middle grade, in fantasy it wouldn’t phase you, but it kind of threw me off here.

Cari: It did put him in the hospital. On the other hand, I think there are teens that see that level of violence all the time. you can turn on the news and see violence all over the world.

Holly: One of the main points of the book seems to be that life isn’t always black and white. Half Moon likes that in detective ‘training’ all the rules are listed and it benefits you to follow the rules. Real life is a little different.

Cari: Half Moon has to cross a lot of lines to get at the truth. Half-Moon by the book wants to follow the detecting manual, and go to the police, but he suddenly finds himself accused of a crime he didn’t commit.  Out of necessity, he starts to change and becomes good friends with another kid that is from a crime family.

Holly: Isn’t there a saying: necessity is the mother of invention? In this case, I think necessity was the seed of friendship.

Cari: We need to be careful how we judge and stereotype people even as adults.

A fun fact about the Irish Bookscoops sisters, Cari and Holly:

Every St. Patrick’s Day from about age 9 and 10, we spent the entire day dancing, often until way past bed-time, all around the Treasure Valley as part of the O’Connor School of Irish Dance. We each have 9+ years of Irish Step Dancing under our belts. We’d like to pay tribute to our wonderful teacher, Bella Yerina of the O’Connor School of Irish Dance in Thousand Oaks, California, who flew up to the Boise, Idaho area about once a month to teach us. We also would like to pay tribute to Terry Jung (check out the 3rd picture on this site to see her perpetual trophy!), who supervised our weekly practices, managed all of our public performances, and also taught us many dance steps.

*If you click on the link above to check out the Irish Dance site, please note that we were a part of the school back in simpler days, before River Dance took the world by storm. The costumes we wore were the white ones with green and gold embroidery, and we didn’t use curly wigs back then- we did things the hard way sleeping in curlers all night and loading on lots of hair spray!

**The BBC did a series of thirteen episodes called Half Moon Investigations on the BBC in 2009. It would be fun to check these episodes out!