Our 1st Double Scoop by Cari and Holly 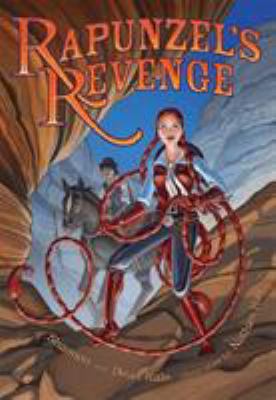 First off, we are tremendously excited to present Rapunzel’s Revenge as our first ever double scoop! As big fans of Shannon’s other books, and with a little Rapunzel experience of our own, we felt almost compelled to choose this tale. We weren’t sure what to expect from a graphic novel and a co-author, but were intrigued, to say the least. After writing this review together, we have more respect for Shannon and Dean (writing a piece with someone else is hard work)! Lot’s of give and take makes us curious what type of arguments might they have had? Not that we would know anything about that . . .

****Stay tuned for our own “Rapunzel” reader’s theatre following the review.****

Holly – I identified with Rapunzel trying so hard to do daring things, but it wasn’t natural at first- she was a total klutz and that is so like me!

Cari – I enjoyed Rapunzel as a female heroine who rescued herself and her family and saved the day without a prince charming. She’s independent, actually more like interdependent, she works with other people to accomplish her goals, but she doesn’t use her good looks to get her places.

Holly – The fact that Rapunzel still loved and related to her mom even though her mom had been a slave in the mines and thus didn’t look beautiful on the outside- this was poignantly satisfying.

Holly – Emily was a hideous ugly brat of a girl. I don’t know if I would have rescued her.

Cari – and spoiled! I don’t like the idea of a child, Rapunzel, being traded for lettuce. (I know that has nothing to do with the writing it’s just part of the original story. As a child it didn’t bother me too much, but as a mother it pulls on my heartstrings.)

What about the illustrations?

Holly – I loved the illustrations. The cover’s probably my favorite, and when Rapunzel looks mad (page 129, last frame). It was a change for me to try and read this type of book. It helped when I studied each illustration with my boys to figure out more of what was happening. Very visually stimulating!

Cari – I had to slow myself down and force myself to look at the pictures, otherwise you miss a lot of the story. Once I got the hang of it, it was really fun. I could tell they live in Utah as I saw some similarities to Zion’s National Park. Really liked how the words and pictures worked together to create a story.

Holly – I liked the explanation of how Rapunzel’s hair grows long. That’s one thing that has always bugged me about the fairytale- how in the world does anyone get hair that long? Read the book to find out the reason!

Cari – It does explain a lot about the hair. My daughter would love that to happen to her (the long hair part, not the locked in a tower part). She did inform us that we can cut her hair when it reaches 100 meters, but she is worried about it falling in the toilet. Makes you wonder about Rapunzel.

Holly- I was surprised that more than one fairytale was involved.

Cari- I liked Jack and his bean that got him in trouble.

Holly- Yep and then all Hale broke loose!

Holly- I like when Rapunzel got her hair cut off (maybe I shouldn’t like it since I have a little experience in that department, ahem). I got a lot of satisfaction that Rapunzel could still have power without her hair and we both think that it shows you don’t have to have a special power to help yourself out of a bad situation.

Cari- I didn’t like that the wicked mother, Gothel, cuts off her hair. (Ack!! What does that say about me. Just remember I was a young child). Not cutting other people’s hair is a good lesson.

What were the kiddos favorite parts?

Cari – My daughter saw the book on the couch, and spent over an hour ‘reading the book’ going page by page.  And then she put a bookmark in it and went to eat breakfast. She desperately wants to read it. I am planning on giving the book to a niece so I told her that we could read it, and that she could ask Santa to bring her the book. I can assure you Santa will be most happy to bring the book.

Sagetree- note the yard stick tucked in the branches

Holly – It took me three days to read through the entire book with my boys. They kept begging me to read it to them and loved it, although I must say they were not so thrilled with the kissing part at the end. My boys really liked the coyotes because we live by coyotes. We frequently warn our boys not to wander into the sagebrush partly because of our furry neighbors who really do have very sharp teeth and are always looking for a meal (we have incredibly tall, thick sagebrush here in Central Washington- more like a child sized forest of short sage trees). So it was a good reminder for them.

Holly – I liked that Rapunzel wasn’t a voluptuous cat-woman type that is so typical of comic books. I appreciated that Rapunzel didn’t show lots of cleavage in order to be a credible heroine which is one of my least favorite things about most comic books. One of the things that is especially important to me is that I don’t want my boys thinking that women have to wear next to nothing to be cool or successful and appreciated by men. I think that this book accomplishes all that and much, much more!

Cari – Ditto for my daughters. It was fun to see Rapunzel deal with the stereotype of – “you’re a girl, you couldn’t possibly do that”, and prove people wrong. Especially when she would help someone at first and Jack would get the credit. It’s like they didn’t see her. It was nice to read this book and it’s definitely one I want in my library for my kids for those reasons plus, its a fun book.

Holly- I agree this is a great book to have on holiday give-away and wish lists- even though the heroine is a girl, the book has universal appeal and will be appreciated by most readers over age 4 (the boys might feel a little self-conscious about liking it at some age point). I’ve tried reading comic books, I know this is a graphic novel (what exactly is the difference?) but I liked this better and highly recommend it.

Cari – A graphic novel is a type of comic book, generally longer then a comic book and tells a story beginning to end. Does that help? I looked it up. Great question. Did I just sound like a teacher? Graphic novels were very popular at my middle school thanks to the principal who introduced them. The kids ate them up.

Now for a little “Rapunzel” reader’s theatre story of our own.

Narrator: Once upon a time there were two sisters, Cari and Holly,

Cari: Um, yeah, do I have to admit it? I’d rather not talk about this. (Sigh) Okay. . . It all started when Holly’s hair got longer than mine. I couldn’t take it anymore! I’m older so naturally I should have prettier, longer hair, right? Well, I knew I had to do something to retain my position as the Rapunzel of the family. Sooo. . . I snuck the scissors out to the backyard and told my innocent, gullible little sister that we were going to play a new game: Haircutting!

Three to four months after the haircut

I would go first and then after she sat really still so I could do a good job, then it would be her turn to cut my hair. (insert conspiratorial cackle). Of course, I butchered her hair almost to the scalp so that she couldn’t possibly ever compete with my golden tresses again. Even better than that- she had to get her hair cut like a boy. If she hadn’t worn dresses you never would have known she was a girl!

Holly: I worshiped the ground my sister walked on- why wouldn’t I believe every word that came out of her mouth? Oh yeah, and did I mention I was 3?

Narrator: All was quickly forgiven and long forgotten until one day . . .

Cari: Holy Moly! Holly’s hair is longer than mine again! What happened? I thought I took care of that! It’s a good thing she’s so young and gullible- she probably won’t even remember the last time we played haircutting! “Oh Holly!” (sing-song voice)

Holly: Oh goody, my big sister wants to play with me! Hmmm. This is a new game. I don’t remember ever playing it before. Sure, I’ll sit nice and still in the swing. Well, as still as I can seeing as how it’s a Swing! I can’t wait until it’s my turn to be the haircutter this is so much fun!

Narrator: May we have a moment of silence? Drum roll please . . .

Mom: Holly? What happened to your hair?

This book has also been nomintated for a Cybils Award. More information available at http://dadtalk.typepad.com/cybils/2008/10/the-2008-nomina.html