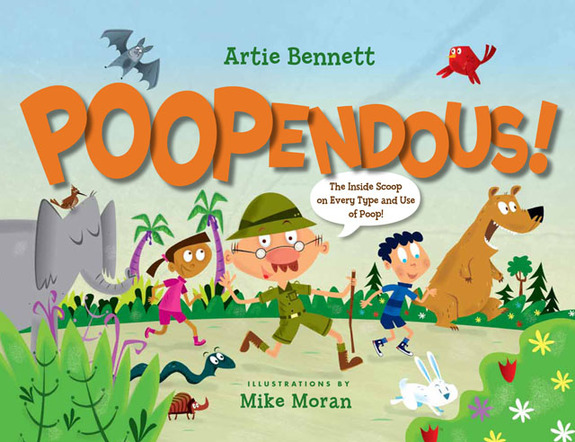 I have to admit I was excited to get this book to review courtesy of Author Artie Bennett. I know it sounds rather odd that a book like this would excite me so much. But not really, when you consider that I am the mother to four boys. We once spent a whole dinner discussing the finer points of passing gas- yes, everyone- well actually, everything that has a digestive tract does this (we had to do our research after we came to a draw). Your possible next book idea Mr. Bennett?

After reading other reviews, I was prepared for much laughter and hilarity. I was not prepared, however, for what we actually got. My two year old has a new bible. Poopendous is his potty training, all about poop bible. He holds this book and studies it like it is the be all-end all book about poop. I only wish it had a picture of a kid actually sitting on the potty instead of running for the bathroom door in desperation. He knows now that pooping is normal (I’m not sure he was wondering, but just in case) and that there are many different animals that do it in many different places. So, he’s decided he is a puppy and needs to poop like a puppy outside. He ran outside with no pants on just yesterday in a serious attempt to prove to me that he is in charge of where he goes to the bathroom. All the characters in his ‘bible’ poop in different places, so why should he be restricted to the toilet?  I just hope he doesn’t take any cues from the monkey in the book, “Monkeys fling when ender stress it helps the monkey decompress.” Over all though it has encouraged him to make all kinds of poops in his potty. Thank goodness!

A big thumbs up goes to this book about the finer facts of Professor Pip Poopdeck’s favorite subject. And just so you know there was no laughter, just quiet internalizing and digesting of these exhaustive facts. By all four of my boys. I was rather surprised. The other children who have been in our home and looked at this book have all gotten a silly grin on their faces. There’s just something special about a whole book devoted to poop- and in rhyme no less. It deserves our utmost respect and hallowed devotion. Kudos to Mr. Bennett and thanks again for the book!