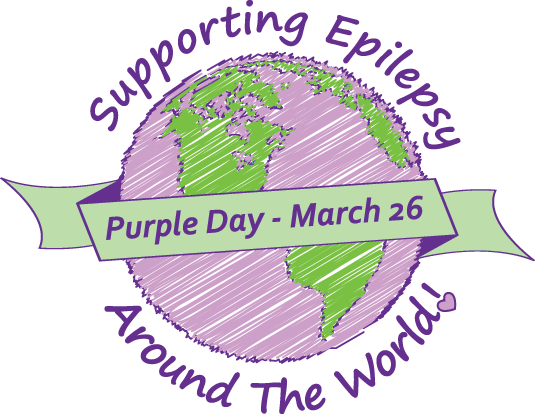 First off Holly and I would like to say thank you to all who participated. We  feel that our first Purple Day Mini-Challenge was a success and we could not have done that without the help of some loyal readers, family and friends. Not everyone was comfortable making comments in a public forum and I received several emails telling me that people were participating. We would like to spotlight the blog posts, authors, book bloggers and others who participated this year.

As this post is a bit late, I also wanted to give you an update on my daughter. Although it seems like whenever I do an update she has another seizure so I am a bit nervous. We are almost 3 months seizure free. Her last seizure was in mid-April, during the night. We are cautiously optimistic that her medication is starting to work, but again we won’t really know for several more months. The goal is to go at least 6 months seizure free and then 12 months, and at that point we will be fairly confident that the medication is working. Other than that we have enjoyed the summer, including swimming, reading, violin lessons and waiting for baby #3 to make his debut. Thanks again for all your support we hope by raising awareness we can bring more light to this disease and contribute to a cure with a monetary donation. Here are the participants:

Jessica – A good friend of Cari’s, who did the photo of Cari’s daughter, if you live in Utah check our her photography website.

Cynthia in Northern Utah – Daughter Ashlyn recently diagnosed with epilepsy. She went all out even decorating her front door purple.

Cristina @ Being Bertrand, Overcoming Movement Disorder – Her son has epilepsy and an undiagonosed genetic disorder,  and Cari met her through Lynn @ Infant Bibliophile. Cristina invited her to attend the Epilepsy Conference in Utah, for which Cari is very grateful.

Natasha Maw @ Maw Books, real life friend of Cari. Our children play together. Here are the links to her post about Purple Day and her review of Little Skink’s Tail.

Barbara @ On the Bookcase Has had epilepsy for 40 years.

Stephanie @ Stephanie’s Written Word Whose daughter, Leah has epilepsy and Stephanie reviewed Becky the Brave, A Story About Epilepsy.

Britt @ Confessions of a Book Habitue – Had a baby the week of Purple Day and still managed to participate. You go girl! Our daughters are good friends and love playing together.

Laurel Snyder – Author of Any Which Wall, Up and  Down The Scratchy Mountains and many more fun sounding titles. She also has had epilepsy from childhood. She wrote a lovely post about having epilepsy. As many of you know seizures occur when the brain has abnormal electrical activity. My favorite quote from her blog post ‘We are all human. Electric. Some of us more electric than others…”

Again we’d like to thank everyone who participated in Purple Day. We are excited to announce that we raised an even $50.00 to donate to Citizen’s United for Research in Epilepsy – CURE founded by Susan Axelrod.  I chose CURE because of their relenting efforts to unravel the mystery of epilepsy and ultimately find a cure. From an article written by Susan Axelrod entitled Agony, Hope and Resolve as part of a feature Newsweek did on Epilepsy called The Mystery of Epilepsy: Why We Must Find a Cure.

“We must accelerate research efforts in the field now and address this age-old problem with the urgency and intensity that it merits. Despite the broad public impression, seizures are not a trivial inconvenience. Each and every seizure carries with it the risk of brain damage, physical harm or even death. Until society accepts this and recognizes epilepsy as the serious health problem that it truly is, progress will continue to lag. Too many young brains will be forever affected. Too many lives will be lost.”